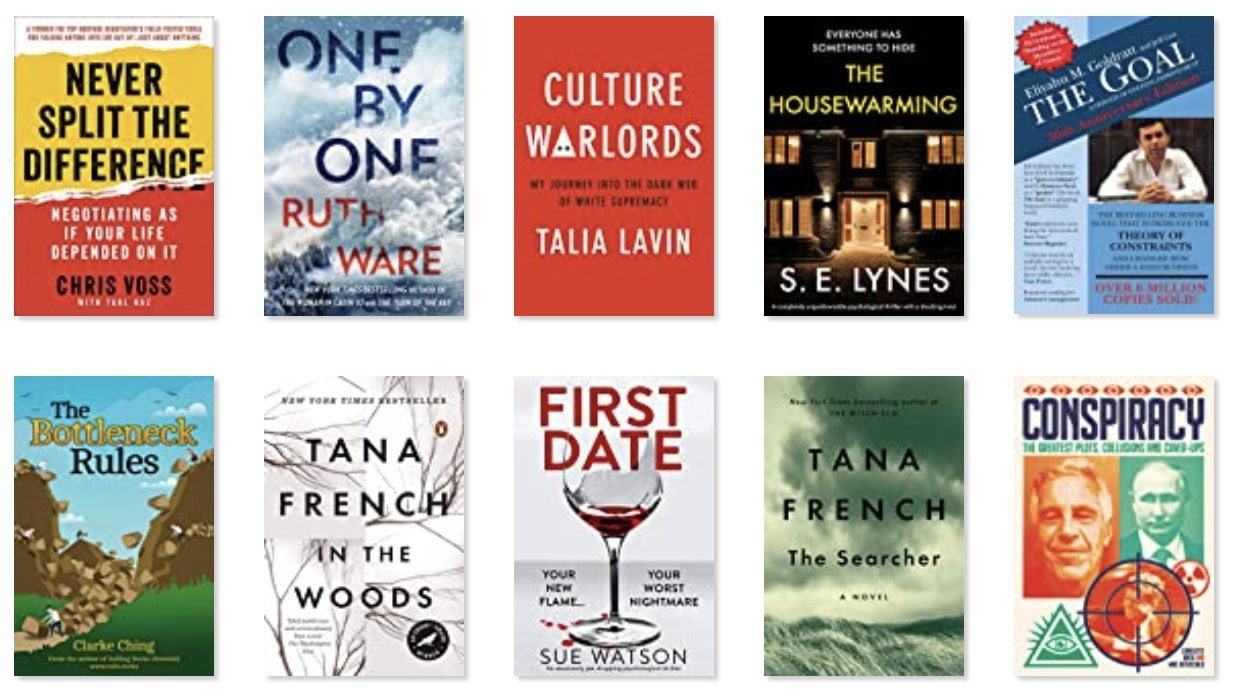 in the order I read them:

Conspiracy: The Greatest Plots, Collusions and Coverups by Charlotte Greig and Mike Rothschild A decent and evenhanded roundup of 20th century conspiracy theories, including some fun blasts from the past (remember Agenda 21) and a couple that were new to me (Gemstone Files)

The Searcher by Tana French I love Tana French and this is her new novel, about a Chicago cop who relocates to rural Ireland and solves a mystery in his new home, a tiny village. The story wasn’t my favourite of hers, but the characters and atmosphere were brilliant as always.

In The Woods by Tana French The first in the Dublin Murders series by Tana French. I’ve read a few of these out of order (in the order they’re available at my library) and they’ve all been brilliant, but this was absolutely incredible. The two mysteries were gripping and the characters and their relationships were so realistic I felt it in my stomach.

The Goal by Eliyahu Goldratt This is the book where EG lays out his Theory of Constraints. It was super interesting and readable by very long.

The Bottleneck Rules by Clarke Ching I wish I’d read this before slogging way through The Goal. Ching summarizes most of the main points of the Goal at a high level and in a much shorter book.

The Housewarming by S.E Lynes A decently written domestic mystery about a couple in suburban London whose one year old daughter goes missing. Definitely better than I was expecting it to be.

Culture Warlords: My Journey into the Dark Web of White Supremacy by Talia Lavin Lavin goes undercover in various online hate groups (neo-nazis, incels) and reports on their culture and beliefs, particularly post-Charlottesville. What she reports is unbelieably bleak but the most interesting part for me is how she contextualises our current situation in the history of anti-Semitism and white supremacy in the US and Europe.

One by One by Ruth Ware I like Ruth Ware’s Christie-esque murder mysteries and high hopes for this one because it was about a tech company. However it turned out to be mostly about skiing, which was disappointing.

Never Split the Difference: Negotiating As If Your Life Depended On It by Chris Voss Voss was am FBI hostage negiator and this book is negotiation lessons learned from that time, with lots of illustrative stories. It’s a brilliant book because most interactions involve negotiation with another party, and the book is full of advice for being a good active listener, developing empathy with others and communicating as constructively as possible.